The Lindsay Rugby Football Club was founded on August 10th 1978 when a group of former students from the two local high schools, (I.E. Weldon & L.C.V.I) and a few ex-patriate Brits got together at the Victoria Park Armoury to declare their intention of forming a rugby club. Sufficient interest was established, approval by the Ontario Rugby Union was received and the Lindsay R.F.C. was on its way.

Having played four games, winning two and losing two in that first shortened half season of 1978 the club exploded into the rugby cauldron with a 16-2-2 showing during the first full season in 1979. It was a glorious start for the young club and spirits were high. Many of the ex-pats hung up their boots after that initial season having returned to the game for one last hurrah.. Neither of the two high schools were playing rugby at the time, the supply of new blood into the club dried up. We fell upon a couple of tough, mean years. 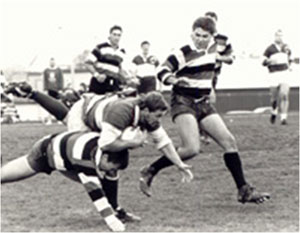 With hope springing eternal in the human breast, the club endured those tough years with grim fortitude. We began the 1980 season with a policy of hosting incoming touring sides from Britain. This decision was made to stimulate interest in the club as an out going enterprising body. Our first guests was the Burnage Rugby Club from Cheshire, Northern England. The visit appeared to give the club a greatly needed kick start. While we continued to struggle for player strength the club survived, and gradually, Oh! so very gradually grew that little bit stronger each season. During the years subsequent to the Burnage touring opener the club counts among its visitors, with no small amount of satisfaction. Furnace United (Wales). Glamorgan Wanderers (Wales), Leith Academicals (Scotland) Den Haag (Holland) Nottingham University (England) and the hosting of a double header games with the National women’s team of England & Wales playing against two Ontario Provincial representative women’s sides. The club has also hosted fourteen High School and/or junior aged level sides from Britain. In recent years, College/High School incoming tourists have been Uppingham College, St. Dunstan’s College, Wallington Grammar School (3 times) Trent College, Dartford College, Welbeck College and John Cleveland College; all from England. Also, incoming tours have visited us from Scotland, Wales and the Isle of Man. 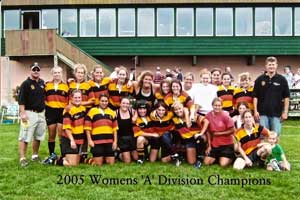 Initially, the club toiled and developed its game at the lower divisions of the Toronto Rugby Union. With game maturity and the acquisition of experienced players the club’s playing ability was enhanced to where we were now becoming a strength in our particular division of play. Successive divisional championships in the Division 111 and Division 11 levels ( 1988 – 17-0-0 with a points for/against of 396/48), has witnessed the club’s progression to our inclusion in the TRU Premier Division, the division in which we won The Millennium Championship (All Ontario) in 1999.

The club’s player strength has now reached the point where we run two men’s senior Xvs, an under 18 years of age (U18), U16 and U14 boys XVs and U18 and U15 girls XVs plus a very strong senior women’s XV (formed in 1992). The women enjoy a successful program. They won the TRU women’s East B championship in 1996 and were second in the TRU women’s A division in 1997. The women’s XV won the Toronto Rugby Union’s “A” championship consecutively for 5 years (2003-07). They have also won numerous tournament championships.

1997 saw the club embrace minor rugby with the formation of a Mini (non-contact) program for co-ed children under 13 years of age. Initially all of the minor rugby followed the ‘flag’ (non-tackle) format. The year 2005 witnessed a re-alignment of this style to the children 8-9 years playing flag while those older players, 10-12 years old played a tackling game of 10 a side rugby. Lindsay’s minor U12 team won the Provincial Consolation Championship in their inaugural year.

The club has supplied players to various representative sides, including: Canada Senior Men’s, Canada Men’s U21, U20, U19 and U17, Canada Women’s U19, as well as many Ontario representatives at all age groups. 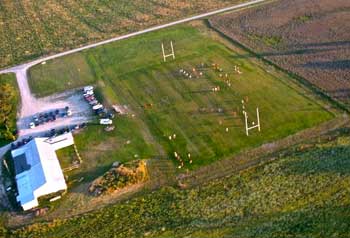 In 2003 we moved to our newly acquired ground and clubhouse on Greenway Road. (now Vince Jones Rd.) (Lot 18. Con 9 Ops Twp). A timely grant from the Ontario Trillium Foundation accompanied by countless (often back breaking and heart aching) hours from the small hard core of devoted club stalwarts witnessed the breakthrough the club had been seeking for years – OUR VERY OWN HOME.

Since the acquisition of this amenity the club membership virtually exploded. We became embarrassed for training space for the various teams, forcing the rationing of training time. Something had to be done. Soon. our ‘resident horticultural engineer’ Alan Wild, took charge of the situation. With the help of a few ‘volunteers’ and a gratefully received grant from the City of Kawartha Lakes a new training surface was created.

As success begats success, the club has witnessed, incrementally, the proportion of championships being won relative to its increase in membership. All three junior boys XVs have won Provincial championships, often two and three years in succession. The men’s senior XVs won the Provincial Millennium Cup in 1999 and the TRU senior championship that same year. Promotion to the Ontario Senior “B” division soon followed where the Club were finalists in the Keenan Cup competition, then winning the Keenan Cup and in 2007 won the Consolation Championship for the McCormick Cup which is the major rugby trophy in Ontario.

Our women’s senior XV, mentioned earlier, are a force to be reckoned with, winning the TRU Senior women’s “A” division five years in succession. The U19 women won their Provincial championships during the same time span, as many of the U19s also played with the senior women’s XV. During 2007 we introduced a U17 women’s XV. They went through their inaugural season of 5 games undefeated. 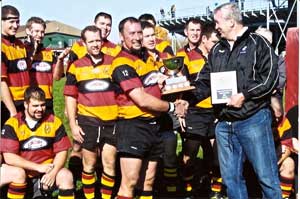 The clubhouse itself is continually being upgraded. In addition to a smart looking pressed concrete patio, insulation and dry walling of the interior, installation of pot lighting, the creation of a well appointed bar, re-furnishing of 30 new tables and 250 new chairs and most recently, wainscoting the main hall, the clubhouse has become a vaunted and sought after venue for banquets, wedding breakfasts and other similar celebrations.

The club promotes a healthy social life within the club. Our post game barbecues are enjoyed immensely by our visiting clubs. An annual golf tournament, The Robert Stokes Memorial Tournament is a popular sell out of 120 plus golfers. The tournament honours our popular, late club captain, who tragically was killed in the traffic collision. The proceeds from Rob’s tournament is directed to a graduating student at the St. Thomas Aquinas S.S. and to the club’s junior program. Our end of the season awards banquet night is almost justification for wishing the season away.

We are a community oriented club having brought into the area four Welsh male voice and one Scottish mixed voice choirs for concerts. Our members have volunteered their time and talents by assisting the Lindsay Recreation Department with their summer programs and have provided volunteer work at schools. Our members volunteer their time assisting at municipal oriented summer festivals, the Lindsay Agricultural Fair and Elections Canada. The club has ‘adopted a road’, a process where an organization accepts responsibility for the care and tidiness of a certain stretch of roadway. We care-take a portion of Post Road and all of Vince Jones Road (formerly Greenway Road). The club runs a regular sequence of Bingo events in support of the junior programs.